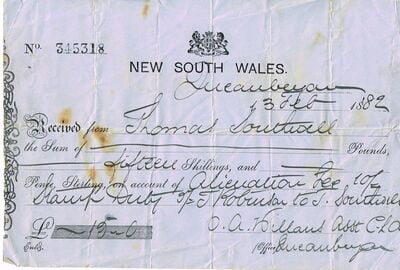 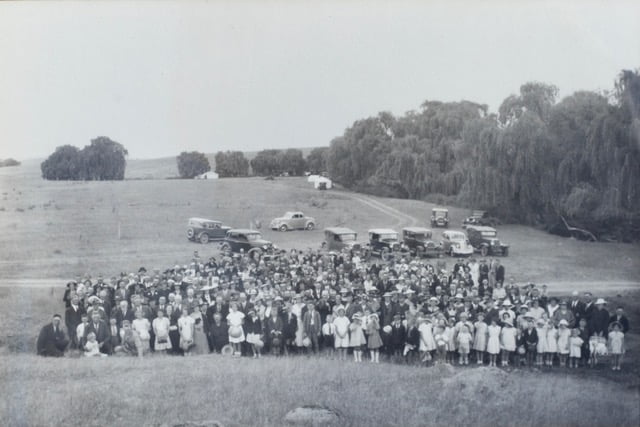 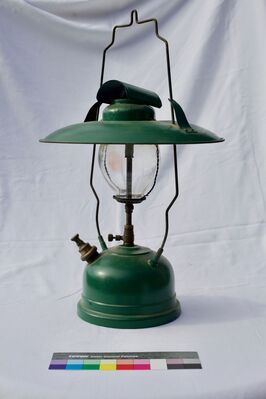 The Brooklands collection consists of objects, documents and photographs belonging to family members of the Southwell family.

These include members such as Thomas and Mary Southwell (Parkwood), Richard and Amelia Southwell (Brooklands), James and Beatrice Kilby (Eneagh Hill), and Cedric and Beryl Southwell.

More about the society​

About the Southwell family

Originally from Sussex, England, four Southwell brothers settled in Australia in 1838. William, the eldest brother settled in Victoria, while the rest of his siblings all settled on the outskirts of the Canberra district.

About the Southwell family society

The year 1988 marked the 150th anniversary of the family’s arrival in Australia, and a committee of family members was formed to organise a family reunion and celebration. 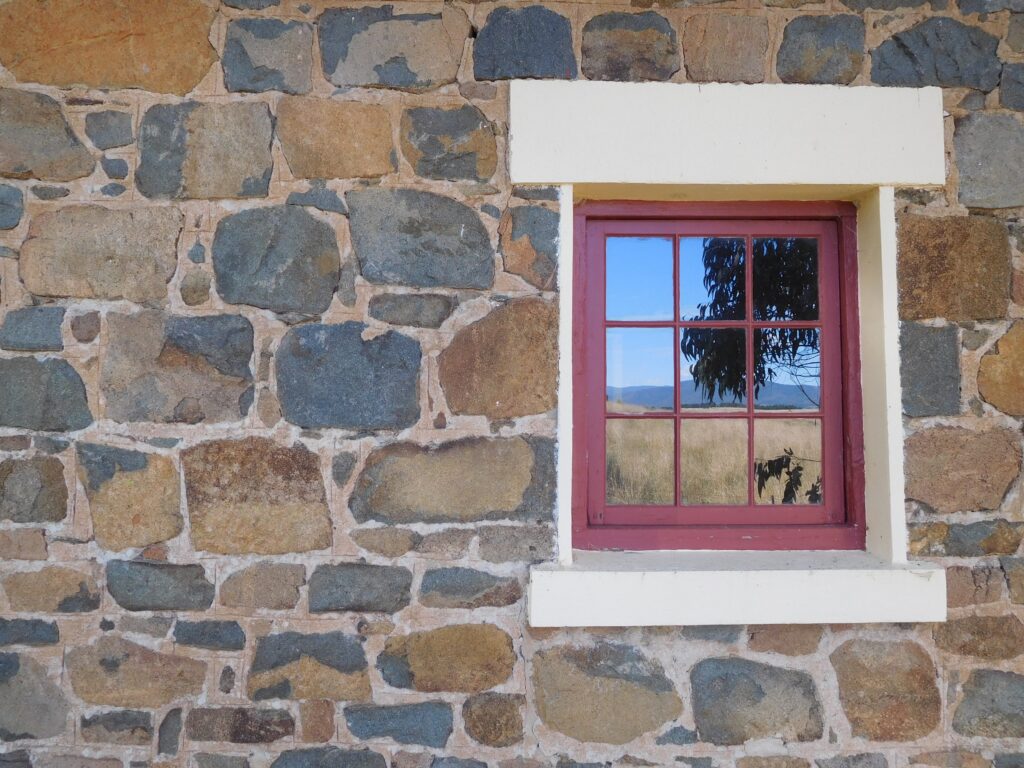 This project was supported with funding made available by the ACT Government under the ACT Heritage Grants Program. 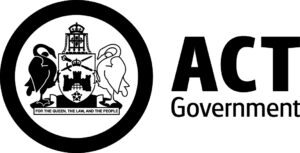 This project was supported with funding made available by the ACT Government under the ACT Heritage Grants Program.

About the Brooklands collection​

This collection consists of objects, documents and photographs belonging to family members such as Thomas and Mary Southwell (Parkwood), Richard and Amelia Southwell (Brooklands), and James and Beatrice Kilby (Eneagh Hill), Cedric and Beryl Southwell.

The collection relates to Parkwood, Eneagh Hill, Brooklands and includes farming, Brooklands School, Wattle Park Church, photographs and personal ephemera relating to their lives in the Ginninderra and Canberra area. 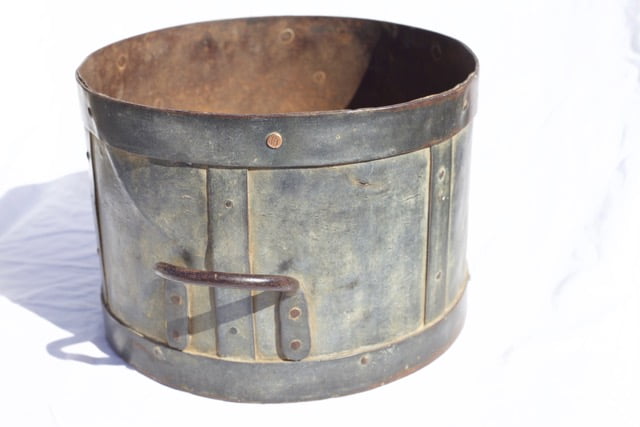 In 1877, Richard Southwell (the son of Thomas Southwell and Mary Croxton of Parkwood) acquired a section of land and named it Brooklands. He cleared the land for farming, grew crops and built a home.

In 1882, Richard married Amelia Smith (the daughter of Edward and Mary Smith of Old Weetangera). They were both devout Methodists and were involved in Wattle Park Methodist Church.

Richard and Amelia had three sons and three daughters. After Richard’s death in 1933, his son Cedric took over the Brooklands property. In 1935, Cedric Southwell married Beryl Kilby (daughter of James and Beatrice Kilby of Eneagh Hill). They had two daughters and a son, Kingsley, who later took over the property.

Cedric and Beryl kept many items relating to their family and the wider community. It is thanks to Cedric, Beryl and her son Kingsley that the Brooklands Collection exists today.

Learn more about them and others at the Hall School Museum and Heritage Centre, and on the Rediscovering Ginninderra web pages.

About the Southwell family

The Southwell family is one of the earliest, and probably the largest, pioneering family in the settlement of the Canberra, and certainly the Ginninderra district. Patriarch Thomas Southwell arrived in Australia with his first wife Eliza in 1838 from Robertsbridge, in the parish of Salehurst, East Sussex, England. They disembarked in Sydney from the barque, Lady Nugent, on 27th November, 1838.

Thomas and his family spent some time around Cobbitty in the Southern Highlands of New South Wales before settling on the banks of Ginninderra Creek. Thomas purchased an area of 987 acres in 1854 and named the property Parkwood. After the death of Eliza Southwell in 1852, Thomas married Mary Croxton. The two marriages produced 19 surviving children. Thomas was followed to Australia by three of his brothers, and a nephew.

Two of the brothers settled in the Ginninderra area. In this era families tended to be large. It was estimated that by 1938 there were 1,300 descendants. Members of the Southwell family were particularly active and successful in agriculture – primarily sheep and wool production, and also in other endeavours, such as the military, church, law, business, education, local government, and many other fields.

First and second generation Southwell’s followed in the steps of the Patriarch, and were especially active in the establishment and growth of the Methodist church. Southwell family members also married into other settler families on a prodigious scale, such that the Southwell family story is deeply intertwined with many other local settler families. The family is now represented through to the eighth generation.

About the Southwell family society

The year 1988 marked the 150th anniversary of the family’s arrival in Australia, and a committee of family members was formed to organise a family reunion and celebration.

The event occurred over the weekend of 12th and 13th of March 1988, with over 2,000 people attending. The organising committee went on to form the Southwell Family Society Australia Inc., which adopted a constitution and was incorporated.

The Society has continued with the primary purpose of maintaining the genealogy and other records and memorabilia of the family. 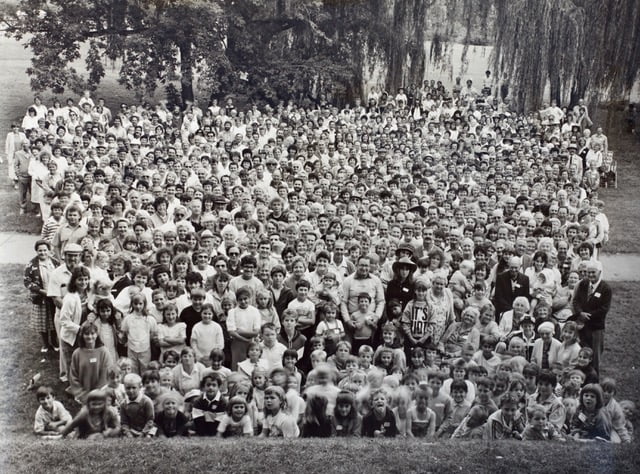 Family gatherings have occurred in 1938, 1988 and 2013 to celebrate anniversaries of the family’s arrival in Australia.

A well-known local historian, Lyall Gillespie produced a Southwell family history: The Southwell Family – Pioneers of the Canberra District: 1838 – 1988, which was launched at the 1988 gathering. A full family genealogy was published in 2008: The Southwell Family in Australia – Pioneers of the Canberra District – 1838 – 2007, and an updated version published in 2019. This latest version contains over 16,000 names.

A further publication was launched at the 2013 family gathering: Stories from Parkwood and Beyond – The Southwell Family. Membership is currently close to 200 and the Society produces three newsletters per annum for its members.

The Society also continues to maintain the stone chapel built by Thomas in 1880 at Parkwood. The chapel is opened to the public by the Society annually as part of the Canberra and Region Heritage Festival.

In 2019 the Society and the Hall School Museum and Heritage Centre (HSMHC) successfully applied for a grant from ACT Heritage, which was used to establish a Southwell Family Archive.

The Society has entered into an arrangement with HSMHC, which provides the Society with storage, work areas and other associated services, including preservation expertise.

The aim of this activity to catalogue, preserve and digitise material held by the Society and various family members, and make it available to descendants, researchers and the general community.

The Society will continue to record the family genealogy and collect material relating to the family’s history and ensure that this record of one family’s contribution to the fabric of Australian society continues to be available.